Barbara Gregorich is a long-time SABR member who has written a boatload of books on a number of subjects ranging from women in baseball to children’s books to mystery novels. I don’t know whether she types her output on an old Remington Rand, which would be really cool, but either way, she’s a prodigious author of repute.

Barbara is also a big champion of Jack Graney, the Canadian-born slick-fielding outfielder for the Cleveland Indians during the heart of, and then the waning days of, the dead ball era.  Upon his retirement he remained in The Forest City to sell Fords during the roaring 20s, before moving into investments and eventually back to auto sales. Once the Depression hit, car sales started to evaporate, but fortuitously, the business of broadcasting baseball games was just starting to take hold.  The Tribe hired Graney on as the first-ever ex-ballplayer play-by-play announcer for a major league team.

Graney held onto the mike as the first great Cleveland Indians radio broadcaster until 1953, and he is currently memorialized in the press box at Progressive Field, as well as having been enshrined in the Canadian Baseball Hall of Fame.

And this is where Barbara comes in. She believes that Graney deserves the top honor any baseball broadcaster can achieve: enshrinement in the Baseball Hall of Fame at Cooperstown as winner of the Ford C. Frick Award for baseball broadcasting excellence.  She made the excellent case for this on her blog last week, and with her permission, we are reproducing the piece in its entirety below.

If you would prefer to read it on her original blog, click here.

In September of this year a research team of the National Baseball Hall of Fame will release a list of candidates for the 2016 Ford C. Frick Award, to be given to a broadcaster who worked during the Broadcasting Dawn Era (roughly 1930-55). The award is given for “major contributions to baseball.” During the month of September fans will get to vote for their favorite candidate on the Hall of Fame’s Facebook Page; in October a final list of ten will be given to the Ford Frick Award Committee, who will make a decision in November. The committee members who cast ballots are asked to base their selection on the following criteria:

• longevity
• continuity with a club
• honors, including national assignments such as the World Series and All-Star games
• popularity with fans

When it comes to the 2016 Ford Frick Award, I don’t know who the Broadcasting Dawn candidates will be or who the committee will select. I do know who I think is most worthy of the Award, and that man is Jack Graney.

In 1907 the Cubs did just that, signing Graney as a pitcher. Despite pitching well in the minors, Jack was sold to the Cleveland Naps at the end of the season. Although he played a few games for the 1908 Cleveland team, he was sent to the minor league Portland Beavers. While there, he once pitched an 18-inning game that ended in a 1-1 tie due to darkness.

At the end of that season Graney was selected as a member of the Reach All-Americans, a team composed of minor and major leaguers [SeeVintageball article.] The team played in Japan (winning all 17 of its games) and in other Asian countries. The Reach All-Americans constituted the first-ever team of professional ballplayers to tour Japan. Thus one of Jack Graney’s many firsts was that he played on the first professional baseball team to tour Japan.

That word “first” is important because Jack Graney, by both disposition and happenstance, was a man of many, many firsts. He was called up to the majors in 1910 and assigned to play League Park’s left field, which at one spot extended 505 feet. He was assigned to the first position in the batting order. Graney had a keen eye for balls and strikes and, because of his discerning eye, often drew walks. [He led the league in walks in 1917 (94) and 1919 (105).] As leadoff batter Jack often posted the first hit of the season, or the first run of the season, for his team.

In 1914 Jack Graney was the first player to face a new Red Sox pitcher, George Herman Ruth. Graney was also the first player to collect a hit off Ruth. Because he was a productive player and a team builder, other teams expressed interest in Jack Graney. The Tigers were interested, as were the White Sox. But Graney did not want to be traded: he was loyal to Cleveland all his life. 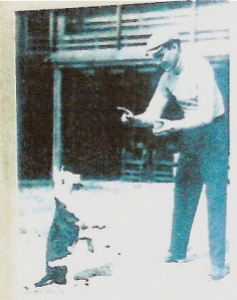 When Cleveland trainer Doc White brought a young bull terrier to spring training in 1912 and gave it to the team as a mascot, Napoleon LaJoie ended up giving the dog to Graney. Thus Jack became the first (and only) player to own a dog which was also the team’s official mascot. Larry performed tricks before the game not only in Cleveland, but also in other American League cities. He was the first dog ever formally introduced to a President of the US [Woodrow Wilson]. Graney, of course, performed the introduction.

These facts about Jack Graney are interesting but only partially relevant to why I believe he is worthy of the Ford Frick Award. I say “partially relevant” because all these things show what kind of person Jack Graney was — one totally unafraid of the new or unknown (Japan, bull terriers, Babe Ruth, Woodrow Wilson). One willing to step in and be the first, even when the results weren’t guaranteed.

It is due to Jack Graney’s courage, love of baseball, and character that he stepped into the future in 1932, when he became the first former major leaguer to become a baseball broadcaster. And that was for the team he had dedicated his playing life to: the Cleveland Indians.

Teams did not send their broadcasters on the road in those days, so for away games Jack worked with tickertape. When the team was away, tickertape would tell the stay-at-home broadcaster what happened on each pitch. The broadcaster would then re-create the game as if it were live. Jack Graney, who had played in all the American League stadiums for more than a dozen years, re-created the games vividly. He was able to describe the stadiums, the fences, the grass, the dugouts, even the scoreboards that a long ball bounced off of. Through his player’s knowledge as well as his broadcaster’s knowledge, Graney was able to bring the game to life for radio listeners. In doing these things, Jack Graney set the standard for future play-by-play broadcasters. Ted Patterson, author of The Golden Voices of Baseball, wrote that Jack Graney’s “ability to re-create a game from just a telegraphic report has never been paralleled.” [See also Ted Patterson’sJack Graney, The First Player-Broadcaster.]

Graney, who had a family to support, also worked as a car salesman in Cleveland, and some of his WHK broadcasts were from a glass-enclosed room within the dealership. People could stop by and watch Jack broadcasting games. He, in turn, could keep an eye on customers.

A caring, gregarious person, Graney shared his knowledge of the broadcasting booth with others. Jimmy Dudley [Ford C. Frick Award, 1997] was relatively new to broadcasting when, in 1947, Bill Veeck teamed him with Jack Graney. Dudley recalled his association with Jack as “one of the greatest I have ever known.”

As a broadcaster Jack Graney brought the same professionalism and dedication to his new baseball career as he had to his previous one. In 1934 CBS asked him to do the national broadcast for the World Series. But Baseball Commissioner Kenesaw Mountain Landis, who ruled with an iron hand, forbid it on the grounds that a former baseball player could not broadcast impartially.

Jack Graney wrote a letter to Landis, protesting the decision and stating that he was now a broadcaster, not a player: that he was a professional and knew how to behave as an impartial broadcaster. The result was that Landis relented. (I don’t know, but perhaps Jack Graney getting Landis to relent was also a “first.”) In 1935 Graney broadcast the All-Star Game for CBS and then, along with Bob Elson [Ford C. Frick Award, 1979] and Red Barber [Ford C. Frick Award, 1978], he broadcast the 1935 World Series between the Chicago Cubs and Detroit Tigers.

Thus Jack Graney was the first former baseball player to nationally broadcast a World Series. Through his letter to Landis and his professional behavior in the broadcasting booth, he opened the door for other players-turned-broadcasters, such as Joe Garagiolo [Ford C. Frick Award, 1991] and Bob Uecker [Ford C. Frick Award, 2003]. These player-broadcasters stand on the innovative and helpful shoulders of Jack Graney.

Throughout Cleveland, and also throughout southern Ontario, Jack Graney was a much-loved broadcaster. His voice came over the radio all summer long. His daughter, Margot Graney Mudd, remembers that on summer days you could walk down every block in Cleveland, and from every porch came the voice of Jack Graney on the radio. Cleveland Plain Dealer reporter Bob Dolgan wrote: “When he [Graney] talked you could smell the resin in the dugouts, feel the clean smack of ball against bat and see the hawkers in the stands. He was a careful reporter and observer. He was short on ego and long on talent. His voice dripped with sincerity and crackled with vitality.” 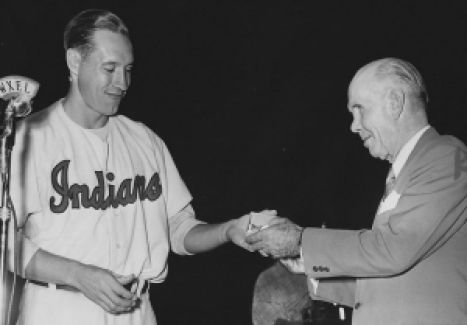 Looking at the criteria for the Ford C. Frick Award once again, it is clear that Jack Graney qualifies on all counts:

• longevity — Yes, 23 years as a broadcaster
• continuity with a club — Yes, 23 years with the Cleveland Indians
• honors — Yes, broadcasting the 1935 All-Star Game, the 1935 World Series, induction into the Canadian Baseball Hall of Fame, namesake of the Jack Graney Award
• popularity with fans — Yes, he was very popular during his Broadcasting Dawn days, with fans throughout northeastern and even southern Ohio and also northwestern Pennsylvania and southern Ontario. Many of these fans still remember Jack Graney’s broadcasting today

When Jack Graney was an infant, a batter needed five balls to take his base. When Jack was a toddler, the rule was changed to four balls. When Jack was just learning how to judge a pitch and swing a bat, major league pitching distance was increased from 50 feet to 60’6”. If young Jack happened to favor a bat with one flat side, he had to give it up at the age of seven: that’s when bats were required to be rounded.

During Jack’s major league days a cork center was added to the baseball. And the spitball was outlawed. Toward the end of his playing days, the first broadcast of a baseball game took place [August 5, 1921, on KDKA]. When asked to step into this new world of baseball broadcasting, Jack Graney met it with the same courage, attentiveness, and dedication he had met other challenges. He stepped into the broadcasting booth and brought the game to millions of fans. Not only that, he shared his hard-earned knowledge of how to do things on radio with newer and younger broadcasters. 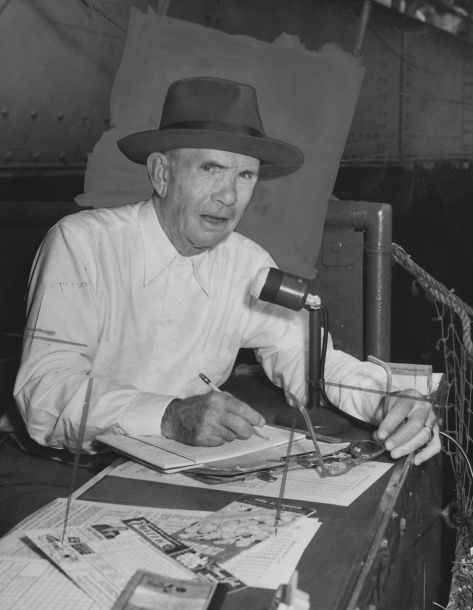